I think libraries are fantastic places.  Always have done.  I became a member of my local library before I started school and enjoyed nothing better than finding a quiet place between the towering book shelves to pour over my latest borrowings.

And I'm still like that today.  But now they've got rather plush violet chairs to sit in. 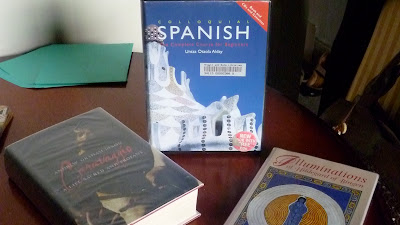 As you can see, the Gaelic moment has passed and I have opted to give Spanish a chance.  Gaelic is too hard to learn on your own and the library set was on cassette.  Which meant hauling an ancient Walkman out of the cupboard.  Sadly SOMEONE had left batteries in it about 20 years ago and I have not been overly keen on trying to prise their leaking bodies from the cavity....so I managed to find a mains adaptor. A rather short mains adaptor, which meant that I was trying to learn Gaelic humphed over like Quasimodo.

I have gone instead for Spanish.  358 million people can't be wrong.

I have opened the box (something that I failed to do in the library).

It has cassettes.  Ah well, at least Quasimodo speaking Spanish is a step in the right geographical direction I suppose....

The book on the left is a biography on one of my favourite artists - Caravaggio.  What a man - a brawling, whore-loving, artistic genius who thought - amongst other things - that the Vatican wouldn't be perturbed about him using the body of a drowned prostitute as the model for his Death of The Virgin.

And on the right, the Illuminations of Hildegard of Bingen.

I haz eclectic tastes, no?!

Anyhoooooo the main thing is I GOT MY GIFT SETIFICATE FOR WINNING THE LIBRARY SERVICE'S MILLS &BOON COMPETITION!!!!!

Now I have TWENTY legit pounds to spend in the bookshop in town!  What will it be?!  What book do I NEED to buy?!

PS - the two envelopes on teh table (green) are birthday cards that should have been posted last month. Perhaps a book on time management?
Delphic utterances by Alison Cross at 15:45