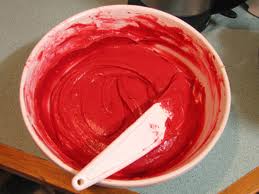 I am very fond of cookery programmes and cookery books in general. I take them up to bed and peruse them with the same lustful curiosity that a teenage boy might study his rather well-thumbed copy of Razzle.

'Ooooh' I groan, turning the page to a centre spread of a leg of lamb in a herby tomato sauce on a bed of plumply moist macaroni.  Looks as tastily Italian as Rufus Sewell in a Versace suit. I show Tertarus the glossy picture:

I prod him some more.  'Doesn't it look FABULOUS?  But in real life, of course, MY cooking doesn't look like that. It's all specially lit and airbrushed in post-production to make us think we can all do it.'

Anyway, I am spreading my love of watching people cooking and baking to our son and on Monday evenings we are found glued to the sofa and hard-wired to BBC2 where a beautiful ex-model called Lorraine Pascal tootles around London on a moped and shows us how easy it is to bake.

On Monday night just past, she made a 3-tier Red Velvet Celebration Cake and it looks like this:

'That looks quite easy,' I thought 'I could make a single layer version of that, nae problem'.  That was my first mistake. Before I knew what was happening, I'd spent a fortune in Tescos on cake tins, icing, butter, fondant and vanilla extract.  Reader, we began at 10.30am this morning and this is how it went.....

10.30am - gather together all ingredients

10.35am - realise that the butter should be soft.  We put it on a plate and sit it on top of the radiator.

10.40am - we get bored waiting for it to soften and cut it up into lumps and hope for the best.

10.50am - we weigh the castoer sugar ...and realise that we have no food mixer out yet.  We finally find the Kenwood Chef at the back of the cupboard and, as we haul it out, a crystal fruit bowl clatters into a thousand razor sharp shards.  I clean everything up.  I give the Kenwood a dust down.  It has not seen action since before Sonshine was born.  He is 10.

11.00am - we attempt to cream the sugar, butter and half the eggs together.  A tsunami of sugar spills over the side of the mixing bowl.  Sonshine says he can smell electrical burning.

11.20am - I bravely turn the Kenwood up as high as it will go and the house's ring main doesn't fuse.  The smell of burning is lessening.  That may just be my imagination.  Sonshine backs off and cowers behind the hamster cage.  He suspects Hestia-induced fire-raising about to start.

11.30am - we take some digital photos...but the brand new little camera seems to have stopped working.  There is much colourful and energetic swearing (from me) and much grumpy behaviour (from Sonshine) that culminates in him skulking off to playgroom, leaving me to clear up.

11.40 - We sit down to watch AGAIN the making of the cake on Lorraine's BBC page.

11.50.  We conclude that our mixture may not be slack enough (as Sonshine chisels it out of the bowl and into the brand new cake tin.

Midday -  We put the mixture into the oven and the oven timer is twiddled for the required time - I decide that this is a good way for Sonshine to do some incidental arithmentic:

Sonshine (with confidence and not missing a beat):  '120 minutes'.

I make a mental note to go over hours and minutes with him at a later date.

I set the timer for 75 minutes and start the butter icing.

After the sloshing up the sides of the sugar right at the beginning, I am wary of my Kenwood's temperament - at the risk of sounding a bit Jeremy Clarkson, it seems to be tending towards the South American - prone to impulsive actions and, erm, a bit fiery.

I look at the remaining butter.  It *is* room temperature, but room temperature in a Victorian house is sub-zero.  I throw caution to the wind and put it in the oven on a plate.

I sit down with Sonshine at the mac to watch a brilliant trailer for the newest LEGO Star Wars game.  He is inconsolable to discover that it's not available on the games platform that we have.  Oh dear.

I remember about the butter. Eventually.

I pour the melted butter into the icing sugar and add a little vanilla essence.  The machine is switched on.

Almost immediately a vast mushroom cloud of icing sugar is cast up over the worksurface, my clothes, my slippers and the carpet.  I hurriedly switch the machine off and search for a way around this.  I artfully arrange a tea-towel around the machine and switch it back on.

I stop the machine and untangle the tea-towel from the rotor blade.  The smell of burning is worse than ever..  This cake is seriously starting to PISS ME OFF.

Sonshine has now returned to the kitchen and is licking the beaters, bowls, palette knives etc clean of cake mixture.  After a few minutes, he looks a little green around the gills.  He goes for a lie down.  Too much red cake mixture is obviously not good for little boys.  Just as icing sugar and melted butter is no good for kitchen carpets.

The icing is eventually made.  It could hold a brick wall together.  Sonshine asks if I have remembered the cream cheese.  I haven't.  We add the cream cheese and rewhizz. It looks much better. I decide to lick the mixing blade as a Cheffy reward.

After a few minutes, I look a little green around the gills.  I tell Sonshine to budge over on the sofa and I go for a lie down.  Too much cream cheese butter icing is obviously not good for domestic goddesses.

...the oven dings and we take out the cake.  I get my Good Camera out (the one that never seems to have a charged battery when I need it) and take a picture of the cake.  It looks bloody lovely.  The camera tells me that the battery is flat.  Fuck - what *is* it with me and electrical contraptions today?

We retire to the playroom to faff about on the internet until the cake cools down.....

We vow to leave the cake for an hour, but we are an impatient duo and we get back to work within about 30 minutes.  The cake has risen beautifully in the middle, which means, when I turn it upside down (allowing us to ice the perfectly flat bottom) it tips over like a child's spinning top.

I decide to cut the pointy bit of the cake off.  Sonshine and I eat it.  It's ok.

We slap on the first layer of butter icing and then attempt to refrigerate it until it goes a bit hard.  After an hour, ours has still not even gone a tiny little bit stiff.  We decide to just forge ahead and finish the icing.

By this time, my temper is short and I am fucking SERIOUSLY fed up with this cake.

We reserve a bit of the icing for some coloured shapes at the end.  And soon the cake has a white fondant sheet spread over it.  We work it down onto and around the cake.  Sonshine eats a bit of fondant and announces that he doesn't like it. FUCK.

I decide to add some red food dye to the white fondant that we'd set aside.  After a few minutes moulding, my hands look like they could star in SlaughterHouse Five and the fondant is sort of red.
I cut out four hearts and half-heartedly stick on top of the cake.

Sonshine decides to make a sculpture for the top of the cake and sets about making a small but famous plumber from the red and white fondant.

I check the kitchen clock, it is bloody-well 4pm and I haven't even THOUGHT about dinner.

Shall we have a cup of tea and some of our lovely cake, I ask Sonshine.

He looks grimly at the cake and rubs his tummy - full of uncooked cake mix, butter icing and blobs of fondant.

'I think I might give it a pass mum.'

It is now 5pm on Saturday night and Hestia wonders whether a ham sandwich would do for dinner.
Delphic utterances by Alison Cross at 17:00