In which I realise that not everyone appreciates a Hestia in their neighbourhood.

I’m a great believer in taking personal responsibility for changing stuff that annoys you.  I would like to think that it is a sign of being fully civilised, but I suspect that it might have something to do with the swiftly approaching menopause.

The little wooded area next to my home is permanently full of rubbish, so once a quarter I get my wellies on and stuff my pockets with bin bags and I clean it up myself.

Something that has been annoying me recently are my neighbours' bins.

There are 10 of them from the Housing Association flats over the road and they are supposed to be put back behind the building after the binmen have emptied them, but only two people do this.  The rest leave their bins out by the pavement.

This has become a problem.

In a moderate wind, the bins are blown over and have even blown on to the road.  Other times, kids (or passing drunken teenagers) cannot resist the lure of human-sized green skittles and send them bowling over onto the grass.

As a result, the contents blow up and down the road.

This gets, frankly, right on my nerves.

This morning, I saw that they had all been knocked over last night.  I watched a young woman pick her way round them on her way into the flats.  I watched a man cart buckets past them to wash his car. 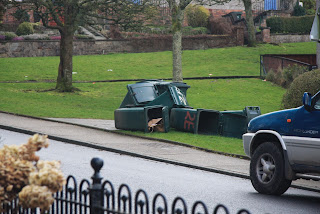 So, I did what any menopausal woman would do: I got my jacket on and moved them myself.

I soon started to feel very vulnerable.  Who the f*ck am I to be telling people what to do with their bins?!  There's more than just me in the street? Why is it always ME?!

Still, I reasoned, I’m doing everyone a favour by putting them back where they belong.

The young woman re-emerged from the flats:

Her: What the f*ck are you doing with my bin?

Me:  (nearly shitting myself with fear) I’m just putting it away for you, is that ok?

Her: Ahm gonnie get the polis onto you – that’s no your bin!

Me: (getting somewhat pissed off)  Do you want me to put it back where I got it?

I then re-trundled her bin back out to the grass and carefully tipped it over on it’s side and patiently removed the glass bottles that I’d put in it, artfully laying them on the grass in a rough approximation of how I’d found them.

Me:  (genuinely remorseful) Really sorry to have upset you.

Came home.  Poured self a massive gin and tonic.  I broke Lent with only a week to go, but I like to think God will understand the mitigating circumstances.  Anyway, He’s got his hand’s full with child-abusing priests in Canada just now.

I have just sent an e-mail to my local Councillor (who lives further up the hill) to warn her that she might receive complaints about a mad woman who moved all the fallen bins off the street this morning…..and then put one back.

Sometimes I don’t understand the world.  Most  of those times I’m glad I don’t.

(Note:  the car just in shot has had it's driver's side window put in last night too - were the incidents done at the same time?  BTW - they had still not cleaned up the broken glass by 1pm today, but had moved the car twice - I really have turned into a Grumpy Old Woman.....)
Delphic utterances by Alison Cross at 16:00