Mercury doesn't go retrograde until next week, but I more than made up for it myself the other day.

I think we could blame it on my hormones or the Fast Diet (monthlies and fasting are tricky bedfellows - there's too much coming out and nothing at all going in!)

Anyhoo, I had gone to the supermarket with Sonshine on the first day of half term.  I wasn't too worried because we had plans do Do Things over the following days that I'd promised aaaages ago, but for Wednesday and Thursday,  I was casting around looking for stuff to do.

We went to the supermarket together.

I know.  Not exactly fun - but I wanted him to see that I didn't spend ALL my time in front of the computer and that the food in the fridge had to come from somewhere.  I made a list.  And even better, I remembered to take it with me.

We stood in the supermarket, me issuing orders like Field Marshal Montgomery and Sonshine nipping up and down the aisles fetching milk and bread and all manner of Scottish delicacies....pies, cheese.  Oh yeah, it's like Ocado up here.

Anyway, the shopping was done in lickety-split time and we drove home.  Me, concentrating on some hideous debacle on the Jeremy Vine show.  Sonshine looking out of the window and wishing that he was ANYWHERE but with his mother listening (and shouting along to) the Jeremy Vine show.

I took the car down the drive way and did a little three *cough* or maybe six point turn to ensure that it was facing back up the driveway, and then drove a little closer to the back door.

The three bags were duly unloaded from the boot and Sonshine dutifully carted two of them up to the back door for me.  He's not a bad soul.

And then, dear reader, I hopped back in the car and promptly REVERSED over the last bag.

I didn't even realise that I'd done it until Sonshine came flying over the grass and gingerly peered into the (much flatter) third bag.  I'd left my handbag sitting on top of it and I was suddenly convulsed with the fear that not only had I ruined the weekly shop, but that I'd pulverised my reading glasses.

And then he could not restrain himself any further and fell about laughing like a drain.

Here is some of the evidence of my driving skillz: 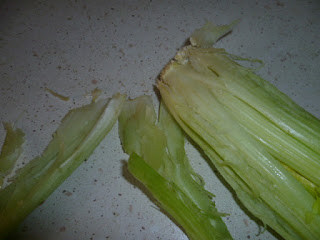 This coleslaw was once a lovely head of celery.  It's now an inch thick. 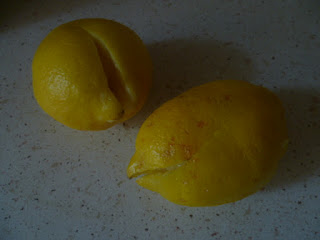 A whole bag of lemons - makes a lot of juice swilling around in your Tesco Bag For Life
These two smiley faced doods made a hell of a mess.
But saved some of the juice from them to curdle milk to make soda bread *woohoo*

Have you gone into reverse about something recently?!
Delphic utterances by Alison Cross at 14:59