Yesterday I was off island at my friend's father's funeral.  Well, it was a cremation, actually.  It was a humanist service and really very beautiful.  I usually emerge from funeral services like a wrung out rag with eyes like piss-holes in the snow, but today it was really uplifting - a celebration of his life.

I did get weepy when my friend's daughter, who's only just into her teens, started talking about her grampa and only managed a few lines before breaking down.  But she regained her composure and not only finished


what she wanted to say, but also played a little tune that she had learned for his birthday on the guitar that he had bought her.  Sadly he passed away before she could play it for him.

It was lovely and I'm sure that if he heard it, he would have been delighted with it.  Even if it was Oasis.

As a result, I have not been around much to be creative, but I thought I'd try a fun sketch using Sketchbook Pro on the ipad (there is a free version available, but this is the paid version - think it was £4.99) whilst watching Eastenders after dinner last night: 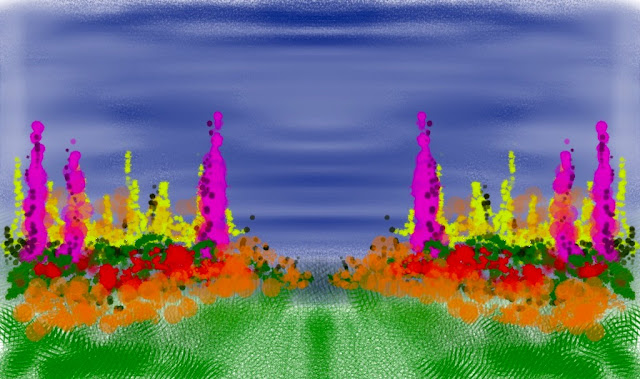 I've decided that it's a garden border, with a central path, running down to water in the background.

Delphic utterances by Alison Cross at 08:16