So, it's not coming as ANY great surprise to anyone who has known me for more than 5 minutes:  I utterly failed to knit a sweater during the month of November.

Yes, while men were decorating their faces with all manner of unusual bum-fluffy 'tasches for Mouvember, a goodly portion of us were taking up the needles for National Knit A Sweater Month.

Where you, erm, knit a sweater in a month.

I had plans, reader, PLANS!

I was all set to knit Nero a sweater to keep him all toasty and warm as he pitty-pads mournfully around my big, echoey (is that a word?!), Victorian home complete with drafts, chimneys, stone floors and the odd mysterious happening at the top of the stair...... (that's a tale for another day!)

I myself am kitted out in two sweaters, a thermal vest, thermal leggings and jeans as I type this to you, so don't go thinking that I'm being cruel to the dog by giving him a poloneck.  He needs it.  Sonshine has so many layers on, he looks like The Incredible Hulk Mini Me.

My NaKniSweMo month crashed and burned, but  I have talented chums.  Enter Stage Right, the lovely Viv.

Viv is to knitting what Mozart was to music - bloody irritating to those of us who languish in the Beginners' Recorder section).

Here's what SHE managed to achieve in November: 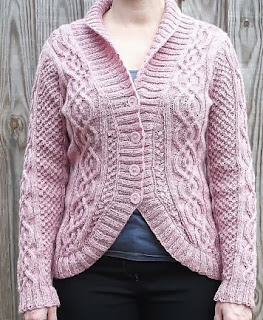 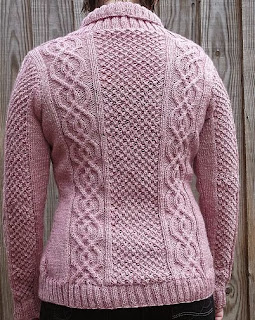 Look - there's CABLE and button holes and other fancy-pants stuff in this!  Isn't it wonderful?

AND not only did she knit this sweater, she finished off this: It's knitted fucking LACE!!!!  I *know*!!!!!  Apparently it is really bad form to use loads of exclamation marks but I DON'T CARE!!!!! Loooooooook aaaaaaaaat iiiiiiiiit!!!! If that's not worth four or five exclamation marks, I don't know what is.

You can follow her kitting progress on her blog, here, where the sharpness of her needles is only slightly less than her sense of humour.  I luffs her.

I has another, equally talented chum called Ania - she also makes corsets and wedding dresses and all manner of lovely tight-waisted stuff!  She decided to knit her dawgie Dexter a jacket too.  She's not quite finished yet because she had to rip it up and start again *hears Orange Juice track inside her head* but here's her Work In Progress, as modelled by Dexter.  Isn't he cute as a button?! 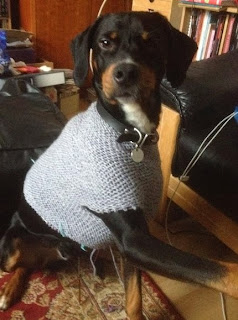 What did I knit? 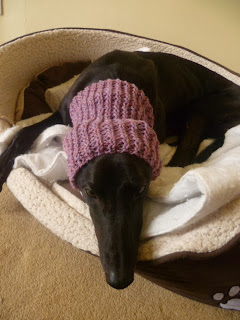 Delphic utterances by Alison Cross at 14:00