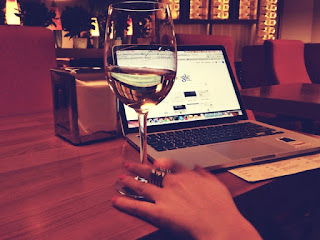 So, I'm looking idly at Facebook, as I do most days.  Most minutes, if I'm honest. And I notice that a Facebook friend has posted something - a poem - and attributed it to a very worthy and poignant backstory.

Here is the God's honest truth of what happened next:

I read over the comment before I hit the 'return' key and wonder about the tone.  Nobody likes to be told that they are wrong, do they?  I add in the word 'sorry'

I read over the comment before I hit return, again, and wonder about saying 'sorry'. After all, WTF am I apologising for - doing the due diligence and checking that the backstory was correct?

I delete the word 'sorry' and replace the smiley face emoticon with a laughing face and a heart.  Surely they won't take offence at that?

I read over the comment before I hit return, AGAIN, and am still not happy at the tone.  I seem to be coming across as very knowitall.  Who likes that?

After the smiley face and heart I add 'I thought that the story sounded a bit suspect, so I googled it' Just so that she knows I am not a knowitall but a googleitall.

I read it again:

Ah - that wasn't said by X, but by Y *laughing face emoji + heart emoji* I thought that the story sounded a bit suspect, so I googled it.

Fuck, now I've made it sound like SHE failed to do her due diligence and check the crock of crap before she posted.  Who wants to read that?

I delete the whole thing and sit looking forlornly at the flashing cursor, fingers hovering over the keyboard.

What do I say?

'Brilliant backstory, but not the right one, unfortunately. This was said by X in 1934 and published in Posh Magazine Title the same year.'  *laughing face, heart*

It's still not right.  I delete everything.  I revert to my first comment, including emojis, and re-read it ...... it needs another emoji.  I am rattling through screens of available emojis......

Whoa Nelly! What the hell are you doing, girl?!

I had spend 16 minutes checking facts, agonising about writing a comment that informed but not chastised, to an almost total stranger, about something that I knew not a jot about other than I'd googled the quote and alighted upon the right originator.  Prior to the post being made, I had never heard of the poem or the author.  I didn't even LIKE the poem when I read it.

Instead, I tore myself up trying not to offend someone I would probably walk past in the street, about something I didn't give a flying fart about.

I clicked the quote and comment section closed and opened a funneh kitteh video instead.  Much safer.

Is it just me that ends up like this?!

Delphic utterances by Alison Cross at 09:30