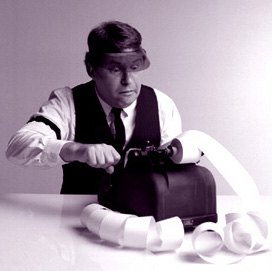 How it came to pass that I am now helping my friends with their Accounts is a mystery.  Especially to them.  I vaguely remember volunteering to do some data input (cos I *IZ* good at typing and that sort of thing) but somehow it morphed into Doing The Accounts.  And even my BEST and kindest friends would admit that such a task is a stretch of my skills.

But somehow it came to pass that I found myself sitting in front of a computer with The Accountant (cue: horses neighing and thunder crashing in the distance),a pile of receipts and assorted bank statements.

The Accountant (cue the horses and thunder again) is a very nice, mild-mannered man, but as soon as he opened his mouth and started to explain 'double entry........day journals........debit....... credit' my brain shut down and the entire back catalogue of Kylie Minogue started playing.  Beginning with 'Lalala....lalalala.... lalalalalala' and drowning out the Accountant (cue: horses/thunder) beneath a tide of disco beats (which might actually just have been my blood pressure rising to 'Stroke Imminent' levels).

A silence then followed in which you could see tumble-weeds blowing across the mathematically barren wasteland of my mind.

'Can you just show me which buttons to push?' I asked, under-arm sweat rings forming through my fleece.

'Have you done this sort of thing before?' asked The Accountant (Cue: horses/thunder)

Another small silence while he waited for some evidence of my competence to drive the Sage package.

'I did a bit of Accountancy in my Post Graduate qualification.  At College,' I said confidently.

Which was true.  But it was only in exercise books, not with people's real money. And let's face it my usual mindset when it comes to the concept of Double Entry involves Johnny Depp and George Clooney.  And a tub of whipped cream......

I cast a smile around the office - glancing at my heavily pregnant friend (as was - baby born in November and now thriving!) and her husband who had that kind of 'help me' expression on his face as he guddled around looking for more valid 2008 paperwork for me to work with.

The Accountant looked mildly worried, but proceeded to point to the keys I'd need to hit.....

Cut to a few weeks later.  Picture the scene, a carpet of virgin snow lies thick on the ground and myself and boss are huddled in manner of Victorian Urchins around a small oil-filled heater.  I am wearing underwear, thermal vest, woolly jumper, fleece, padded waistcoat and a scarf.  And jeans and boots of course.The only sounds are the occasional tip-tap of me on the keyboard and the odd drip from my boss's nose as he diligently ploughs through the graphics for 83 t-shirts for the school's Christmas concert.

'I need....the toilet,' I whisper quietly at the back of my boss's head.  He pauses in his t-shirt work and then resumes his patient toil.

The thought of going to the distant lavvy, in the unheated workshop and exposing my shivering nethers to the nipping fingers of the sub-zero temperatures wasn't filling me with happy thoughts, but I'd sat there for so long, putting off the moment that there was no way I could even hobble home to go for a pee in the comfort of my own loo.

The Boss straightened.  'Ah - the water is frozen so there's a good chance the the flush won't work. But don't worry.'

How can you not worry about a thing like that?  I had a flashback to an urgent toilet stop in darkest rural France many years ago where the loo was piled high with layers of paper and...other things...and I was soooo desperate that I had no option but to join the stack.  I then ran out to the car where Tertarus nonchalantly leaned against the bonnet in the hot afternoon sun and I shouted:  'Drive! Drive!' at the top of my lungs.  He actually thought I'd robbed the cash box as I urged him to speed out of the garage forecourt.  When I explained it was the humiliation of having to leave a Wee Present for the next loo visitor I thought he might open the car door and discharge me onto le motorway at great speed.

So I wasn't thrilled about having to do the same in my boss's loo.

'Honestly, don't worry.  I've got a bucket of water we can slosh down the pan to flush it all away.'

I am now looking even more worried but agree.  I can now barely shuffle to the loo, so great is my need.

I found myself sitting in the icy loo trying to relax and reading an A4 print out of the Stone Mason's Monthly Gazette where all the latest trends in grave stones are pictured in glorious technicolour.  I joke.  My breath misted around me as I began to relax.

The Boss chapped the door. My arse immediately went into cooking-apple mode (take a look at a cooking apple and you'll know what I mean).

'Yes?' I call politely through the door.

'I'm afraid the bucket's frozen,' he called back apologetically.

Jesus. It's like the French Garage scenario all over again. 'Can you boil the kettle and defrost the bucket?' I ask.

'Hang on.'  *sounds of boss disappearing into kitchen*

I have now seized up completely and have crushed the Stone Mason's Newsletter into a sweaty tatter in my panic.

I get myself ready for the imminent arrival of the boiled water.

The boss knocks the door and I open with as much dignity as I can muster and accept the proferred bowl of boiling water with a polite thank you.

I tip it hopefully down the pan.  The contents disappear around the bend.  Grateful in the extreme, I turn on the tap to wash my hands.  Nothing.

I go into the kitchen to wash my hands.  Turn the tap.  Nothing.  The Boss is standing with a mug of coffee for me.

'What did you boil the kettle with?' I asked.

I may be standing here with more layers of clothing on than Sir Rannulph Fiennes, but I have flushed a toilet with Evian which I am fairly sure is something that he has never done.

I return to the accounts, vowing that henceforth, only my own toilet shall be used.
Delphic utterances by Alison Cross at 13:21