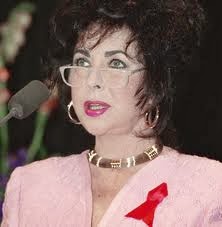 Elizabeth once quipped that some of her finest leading men had been horses and dogs and it was no idle joke - National Velvet and Lassie Come Home confirmed her money-making abilities for the studios and secured her youthful place in the glittery Hollywood firmament.

She adored animals - even as a small child she had ponies, chickens and dogs and fellow actors recall her turning up on set as a youngster with squirrels, dogs and all sorts of pets.

Although the pets on set stuff stopped as she matured into a shapely teenager, she continued to support animals in crisis and she became a patron of Dogs Deserve Better - a charity the rescues chained dogs and gives them a better life.

Elizabeth had converted to Judaism on her marriage to Eddie Fisher and continued to support Israeli causes throughout her life.  In fact, when the airline hijack took place at Entebbe Airport in 1976, she

volunteered to become a hostage.  After the hijack was over, a TV special was made about the event - and Elizabeth co-starred, along with Kirk Douglas.

But it was undoubtedly for her unflinching support of AIDS charities that she will be best remembered. Elizabeth Taylor was one of the first on her feet to try to do something about it, launching the AIDS project, The Los Angeles Commitment to Life Dinner.  It was around this time that her long-time friend Rock Hudson died from the disease.

Let's not forget that AIDS and HIV were very taboo subjects at the time.  There was a lot of confusion, ignorance and fear with many showbiz people opting to turn their backs and pretend that it wasn't affecting their industry - or their friends.

These days, thanks to ongoing research and the development of new drugs, becoming HIV is not the death sentence that it was in the early 80s.


"It is bad enough that people are dying of AIDS, but no one should die of ignorance "Elizabeth Taylor

Even if you disliked her as an actress or a person, there is no taking away from her the impact that she has had on raising AIDS awareness and financing research.

She found solace in service and knew that she could use her fame to great effect - much in the same way as Angelina Jolie does.  Elizabeth's glamour and fame shone light into the dark places that no one really wanted to look.

And that brings me to the thought, how can I live Elizabeth's ideal of service?

Well, for me it's a no-brainer.  I have the most wonderful dog who spent his entire life racing. When he could no longer bring in any cash for his trainer, he was discarded and - fortunately - put up for rehoming.  And that rehoming happens because of some fantastic charities who work closely with the dog-racing industry.

We are hopefully now moved away from the days of finding dead greyhounds piled in ditches with their ears removed (so that no one can identify the dog by its racing tattoos in its ears).

And so here's what I pledge to do.

For the coming year, I pledge to support two greyhound groups - Fife Greyhound Protection (where my lovely Nero came from) and Scottish Greyhound Protection.   Tartarus will have a FIT if I try to rehome another dog, but I'm sure that he'll be ok with me supporting these two great groups.

PS - yes, I'm still sitting here with a ton of makeup on and some outrageous jewellery - and the only person to see me today is the dog!
Delphic utterances by Alison Cross at 15:17