Hestia and Sonshine and Robert Burns 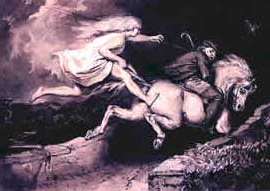 And so it came to pass that P7 decided to celebrate Robert Burns' birthday with a Burns Supper in the afternoon. According to Sonshine, it is taking place at Mount Stuart.  Previous years have been at The Glenburn Hotel.

When you're 11, they probably look like the same building to be honest.

Sonshine has a part to play - he and a friend are reading out some autobiographical deets of the Bard and we have practised and practised, marking spaces where a pause will add meaning, scribbling down pronunciations of words like 'Souter' (sooter) and 'Kirkoswald' (erm, Kirk Oswald).
I ask him this morning if he would like to wear the tartan tie that bears his name. Yes, there is a Sonshine clan and it's rather a pretty tartan too.  He opts to wear it.  Sadly, it was bought when he was about six, so the tie tail dangles somewhere between his invisible pecs.  He flexes them regardless of their non-existence.

He has been weighed at school.  My son is, apparently, overweight.

I tell him that's the end of the Nobbly Bobblies* after dinner.

He is crestfallen and decides he'd rather be 'fat.'

He wobbles his man boobs at me as I tie his tie off for him. I ignore him. He grips his tummy with both hands and wobbles it at me.  I ignore him.

I tell him he is 11 and he will shortly be making the journey into adolescence.  He needs all the wobbly bits he can get, I tell him with early-morning bed-head candour.

He decides that if he is to stand up and speak in front of his entire class this afternoon at the Supper, he needs 'a mask'.

I tell him we are fresh out of Robert Burns masks and the teacher will not take too kindly to Darth Vader doing the reading.

'I want my dad's See You Jimmy Hat.'  That will act as a disguise.' he decides.

Despite my assurances that Clean Amy will most definitely NOT fancy him in a ginger wig and tartan tammy that plays a tinny chorus of Auld Lang's Syne, he insists.

I grudgingly find the hat in the Hat Box and pack it into his school bag.

I find a poem.  Tae a Pie.  In the best of literary traditions, I give you the original hand-written notes and the final draft, presented to teacher: 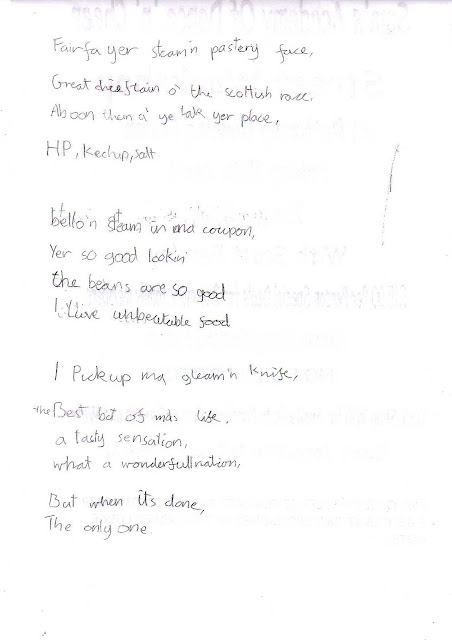 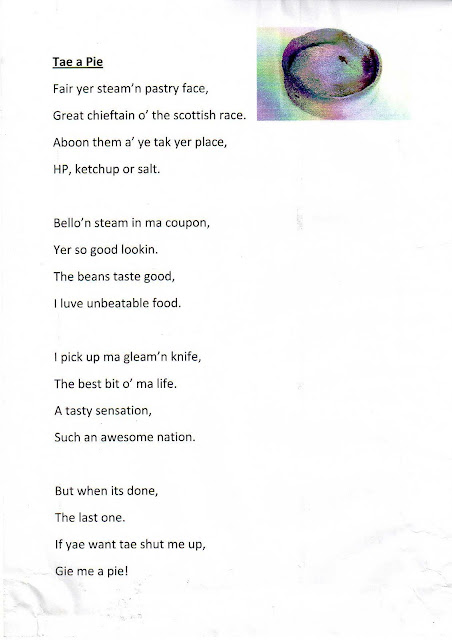 I believe that the poem's subject matter may yield another little round reason why he's on the cusp of overweight.

Happy Burns Night!  For those of you who have not seen this - a link to Robert Burns' famous tale - Tam O'Shanter.  This is the first of his poem's studied at school - given that it's about getting drunk, getting lusty thoughts and witchcraft, it's a wonder it's still fit for the Curriculum for Excellence.

Now, if you'll excuse me, I need to go out to buy some haggis, potatoes and turnips for tonight's traditional dinner. *grabs own tummy with both hands and wobbles it*

....oh yes, have just been reminded that if you REALLY want to frighten your granny and shock the minister, learn the words to Cock Up Your Beaver.  Honest.  Real Robert Burns poem ;-)

*
Delphic utterances by Alison Cross at 09:31