Seems stupid when I write it down like that in black on white, but yes, that's exactly what it is.  I'm not proud of how slapdash I've been with my life so far - nearly 50 years and not an awful lot to show for it.  Other than Sonshine.  And my Kitchenaid, of course.

Anyhoo, I am currently to be found cleaning out my kitchen cupboards at the rate of one every two days.   I didn't say that it was an URGENT urge.

Yes, I've been hoovering up the indeteriminate things that live in the cracks of the back of those cupboards, bleaching the shelves, wiping off the thick layer of dust that mercifully obscures the long redundant sell-by dates on jars and bottles......trying to put dishes that are hardly ever used at the BACK and commonly used dishes at the FRONT.  No matter how pleasing it is to have the big stuff at the back and the little stuff at the front.

Here is a photo of my newly tidied under-hob cupboard.  Yes.  Truly, this is the tidy version.  You should have seen what it was like before.


Oils and vinegars are now stood in regimented rows instead of milling around aimlessly with the chilli sauce bottles which pleases my OCD-challenged Tartarus greatly.

Yes, there IS rather a lot of porridge and stuff to help one's bowels move.....

And this cupboard here...this, I suspect, will be my Nemesis. 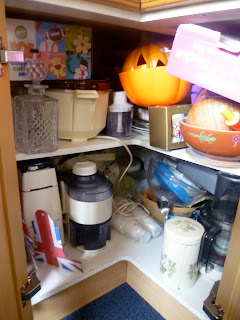 Reader, meet the Corner Cupboard - the one that gets crammed full with all the stuff that you get given that never see the light of day again..... the stuff you inherit that is 'too good to throw out' but too shite to be ever used ......the Hallowe'en bowls, the old mixer that smells of burning, some misellaneous sandwich trays and forty thousand cookie cutters.

But that's a job for another day.

What are you lot up to?
Delphic utterances by Alison Cross at 12:28