Anyway, today I simply HAD to do some gardening because I had bought bulbs and tubers one evening whilst perusing the Thompson and Morgan website.  The way you do when you're bored, got a glass of red wine and no one is on Facebook to chat to..... 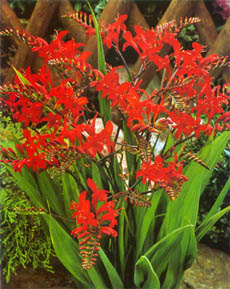 This is Crocosmia Lucifer (not to be confused with the bog-standard orange crocosmia).  Lucifer is a bright splash of red, that looks as if Satan has just run naked through your flower-beds.  Anyway, I got 40 of them.

I also bought a dozen of these: 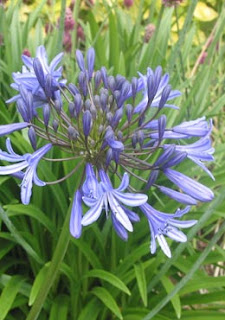 I really wanted the deep blue colour, but they were twice the price of the usual pale blue ones, so I just bought the pale blue ones.  That's going to really disappoint my friend Viv who wanted me to get the dark blue ones.  All I can say in my defence is:  I bought a Kitchenaid instead.

Then I took leave of my senses altogether and ordered 16 of these: 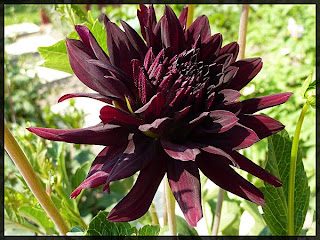 Yes, it's a Dahlia.  A very dark Dahlia, but a much-reviled Dahlia nonetheless.  Most often associated with Best in Show and allotment men who keep their trousers up with string, I think that the Dahlia is due for a revival in the gardening fashion stakes.  Look at it!  Sure, it's going to be alive with ear-wigs, but LOOK AT IT, it's gorgeous!

I live on the island of Bute, which is owned by Johnny Bute, who is the Marquis.  It is said that the dahlia was brought to Britain largely at the instigation of one of the Marquises of Bute.  But that might be nonsense, but it's as close to a brush with fame as I'm likely to get.

Apart from being on the Beechgrove Garden.

Anyone outside of Scotland will be sitting reading this with a very blank expression.  It's a Scottish Gardening Programme.  I know, it seems like a total contradiction in terms, doesn't it? 'Scottish' and 'Gardening'.

Actually, I managed to procure a copy (a reprint!) of a Scottish Gardening book from the 1700s.  I'm afraid that I cannot read it without giggling like a schoolgirl every time he talks about his rose's 'fuckers' <- it uses the long S that looks like an F.  Oh how that makes me laugh.  I don't get out very often.  Certainly not unescorted.

So imagine the new border, it's at the front of the house, so all of these will be flowering against a south-facing red brick wall.  The red darts of Lucifer will arc out in all directions and above them will sway the blue fire-works of agapanthus and, punctuating the whole thing like great black stars will be the dahlia.

It's going to be FANTASTIC.  Providing that I've planted them in time.  A bit of mould doesn't mean that they're dead, does it?  Don't answer that.

Anyhoo - tell me your favourite planting combos - colours, shapes, everything.  If you're very lucky, I might buy the said plants and do a border in YOUR honour.....

And if you're out and about in the garden centres, buy a Dahlia!!!
Delphic utterances by Alison Cross at 13:41