Hestia has a night out....in numbers

0 - Percentage of me that felt like going up to Glasgow for a night out.....what with gallstones, back ache and a touch of thrush.

2 - number of queen-sized beds in our upgraded Mariott room.

50% cheered up at that point - the thought of lowering my back into a massive comfy bed with acres of cool cotton pillows where I could writhe in agony all night without disturbing Tartarus brightened the remainder of my Saturday no end.

100 - number of times I begged Tartarus to buy me a bright red KitchenAid mixer from John Lewis.

75 - percentage sulky I became when Tartarus proudly showed off the new PS3 accoutrement (steering wheel and pedals) which would, I was assured, make Grand Turismo 5 absolutely perfect.

0 - the number of cookery books that I bought while sulking in Waterstone's on Sauchiehall Street.

2 - the number of Adele albums I intended to buy, but then discovered that HMV on Sauchiehall Street has now closed down *depressed face*

2 - number of miles we walked trying to find a restaurant on a Saturday night.  Mercifully, I'd opted to leave my grey shoe-boots behind in favour of my Uggs (sore back, see) or else I'd have needed wheeled in to the theatre on a gurney after all that pavement pounding.

1 - delightful restaurant - Fratelli Sarti on Renfield Street.  Managed to squeeze us in even though we hadn't booked. 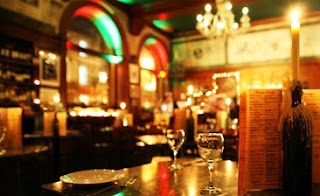 10 - number of the clock that the Cabaret Noir gig started.  It went on until after midnight.  I'm usually in my bed by 10pm.  Rock and Roll.  Would I stay awake? I brooded to myself.
1 -  swift lager shandy in The Griffin on Elmbank Street (where they had, bizzarely, clove scented candles on the table.  It was like being in a dentist's waiting room.  Albeit one with a bar.
15 - number of minutes the previous show was over running by, so we HAD to take ourselves off to The Baby Grand in Elmbank Gardens for another swifty.  It's right next door to a lap-dancing club that Tartarus swore he never knew existed.  Yeah....right.
100% - impressed with the interior of the King's Theatre.  Billy Connelly once said that it was like playing a wedding cake.  And it is.  We were in the Dress Circle.  There were two bars.  Both of which seemed to be operating out of a cupboard the size of your average Punch and Judy stall.  Gig sponsored by Magners Cider, so we had to drink...Magners Cider.  In plastic bottles.
1 - number of amazing sword-swallowing comperes that the gig had - Miss Behave.  What she can do with a table leg defies nature. 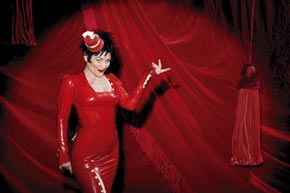 Sure, I watched her from between bloodless terrified fingers, but she was great!
2 - great comics - Richard Herring and another chap who was called, I think, Jim Maloney.
2 - burlesque acts - Chelsea Dagger, for whom the Fratelli's wrote this:
90 - percentage that Tartarus was pissed off for having to go to the toilet and miss Miss Dagger.  She was ok, but not as show-stopping as flame-haired Tina Beans. Who performed in a tin of baked beans.  Tartarus liked that.  I recognised those boobs (see Hestia does Burlesque) and one of her pasties came off.  A bit of nudity.  Tartarus was pleased.
1 - utterly dreadful act and he was the last act too.  A guy who threw rice into the audience and was just too BBC4  for me.  I didn't laugh once.  Except when he put a hammer through a Spandau Ballet album. But that wasn't real laughter, just nervous tension being released.  Understood at this point why the magners cider was supplied in plastic bottles though.
1 - visit to the toilet by Hestia.  Was standing in front of a VERY tall and statuesque brunette.  Didn't want to look too closely in case she was actually a man.  But eventually, me being me and the queue being so terribly long, we got chatting.  She was lovely (immediate attack of the guilts for thinking she could possibly be a bloke).
Contents of brunette's tiny handbag - lipstick, mascara and condoms
Contents of Hestia's handbag - anti-inflammatory tablets, pain-killers, sanitary towel (well, with my luck....) a lipstick and lip brush and, oh yes, can't forget this - thrush cream.  Was I expecting a totally SEXY night or what?
1 - walk back to hotel - after copious amounts of Magners, lager shandy and two glasses of red wine, sore back felt abslootly fine.  You could have performed open heart surgery on me and I wouldn't have felt a thing.
1 - rum and coke for Tartarus when we got back to the hotel = £8.50 of our British pounds which almost resulted in...
1 - heart attack from me.
I went straight to bed once I got up to the room.  Basically by stripping off all my clothes and flinging myself face down onto the mattress.  Was awoken a short time later by definite movement on my bed, not caused by me.  Surely Tartarus wasn't trying to gently wake me from my sleep?  No, he had spilled a cup of coffee over my duvet.  THAT'S more like how my Saturday nights end, usually.
All in all a really good night's entertainment.  Even Tartarus enjoyed it immensely.  Well done Cabaret Noir for getting such good acts.
Other than the rice man debacle *shakes head, doesn't get it*
Came home and quietly ordered new KitchenAid on-line.
Delphic utterances by Alison Cross at 09:17