Hestia's Sonshine goes back to school 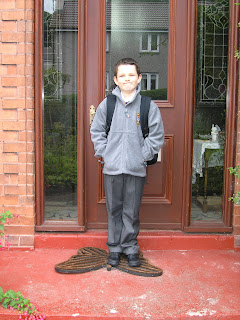 After 6 weeks of lying about in front of the Wii and other assorted things that make your eyes go square and your brains turn to custard, Sonshine has returned to school.

Predictably anxious about it last night, I soothed him as best I could by reminding him that his favourite teacher to date was the one he was most apprehensive about.  Everything would be fine, I assured him, as I pulled the duvet up around his chin and kissed him on the forehead.

Cut to today.  He came home from school and threw his bag down in the hall and sprawled on the stairs, his arms over his face.  Not a good sign.

Now, Sonshine isn't an angel, but he's not a problem at school either.  He's never had a card of any colour issued against him and this was not a great start to a year with a new teacher who is well-known for being 'shouty'.

'What happened? Will you tell me?'
'Well BAC was hassling me all the time, asking me questions and so I answered one.  I said yes.'
'Right.  And?'
'Well, Mrs T said Are You Talking? and I said yes.  And I got a yellow card for telling her the truth.'

Tertarus, who had been listening in the doorway while we had this exchange chipped in.  'Next time he speaks to you in the class, just tell him to button his lip.'

BAC is not a child that you can speak to like that.  To tell him to stop doing anything is to invite a school-lifetime of kickings behind the bikeshed.  This is not a child from a deprived background - quite the opposite.  He is cosseted and indulged by adoring parents who can see no wrong in their handsome son.  This has resulted in a devious, scheming little bugger who is just the sort of kid who will end up hammered to death by a Cuisinaire rod wielded by a teacher who has snapped at his intolerable behaviour.

I suggest something a little less confrontational.

'Let's make a card that you can put on your desk.  It will read 'I hear you, and I'll tell you later.' and all you'll need to do is point to it.  Don't talk.  Don't get yourself into trouble with Mrs T.'

Sonshine sighs and looks at me as if *I'm* someone who simply does not understand 'The Ways of the BAC'.

'He'll KILL me, if I do that,' he says dejectectly.

'I think we should try it.' I say, motioning to Tertarus to step outside.

'What'll we DO?' I hissed quietly to him in the kitchen, well away from Sonshine's batlike ears.

He shrugged again. 'You're the one with the brains.  You'll think of something.'

So here is the something that I've thought of, I'll ask YOU.  What should I do if BAC continues to disrupt things.

*Not of course, their real names.  BAC's real name is 'Utter C*nt of a Child'
Delphic utterances by Alison Cross at 17:04