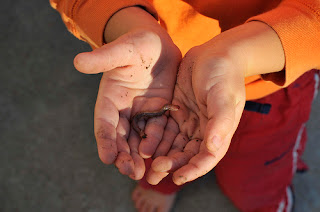 Sonshine got his report card home the other day and although he's doing well at school, his lovely teacher said that his homework 'could be better'.

That puzzled me because his homework always gets done and I always check to make sure it's correct.

What I think she REALLY means is that *I* could do better.

Y'see when Sonshine sits down to do his homework, my contribution is limited to making sure that he is strapped into his seat and has a sharp pencil.  Sometimes I'm called in to assist with a particularly tricky spelling or to unravel some arithmetic mystery, but that's about it.

It would appear that his classmates' parents are a bit more, shall we say, hands on?

For example - one recent homework task was to take their homework spelling words and assign them to the correct parts of a plant illustration (stem, stamen, pollen etc).  Sonshine took his pencil and just sketched a cartoon flower next to the words and ran wobbly lines to all the appropriate parts.  I signed it off - job done.

HOWEVER, I clocked one of the girl's contributions and it was like comparing the Sistine Chapel ceiling to a Stick Man on a post it note.  Her flower started off as just roots beneath the ground, but when you pulled on a paper tab, the bloody plant grew up the page and uncovered the labels as it went.

I had no idea that kids aged 9 had Engineering degrees *eyebrows suspiciously raised*.

Anyhoo, cut to today and Sonshine has a project to be done for Monday - mini beasts.  From the vast collection of things that creep and crawl on God's good earth he has selected........worms.  This was my big chance to start helicopering around him and 'helping' his homework effort.

A small voice piped up from the other side of the table: 'I'll need a sock.' Specifically, a pink, striped sock.  He was, he announced, going to make a glove puppet.

Off we toddled to The Factory Shop (come back Woollies - all is forgiven!) where I purchased a pair of girls long pink and black stripey socks.

'And these for eyes,' he said, tossing in a set of 3 pairs of  button style earrings in pink, blue and lavender.

Brilliant - not a thing for me to sew!

When we got home, he dashed upstairs and came back down with my black nail polish (inherited from a drummer in a band - long story) and dabbed black, glossy pupils onto the blue earrings.  They were not earrings now, they were most definitely eyes.

He popped the earrings through the sock and fastened the rubber backs.  When he slid his hand into the sock and made the sock heel into a lower jaw, Wiggly The Worm (AKA The Soilator) was born.

He then spent an hour on the Mac, meticulously typing a little conversation between him and Wiggly to show that he had learned a clutch of facts about worms.  Here's a snippet.  All I did was tidy up the spelling.

Worm: I've got it sweeeeeeeet.  I've got bits of both.  I'm a hermaphrodite!*

*Sonshine spelling = hermifrodit - I'm tempted to keep it as he typed it because I think he'll remember to say it better with his spelling.

Worms don't actually have eyes, so the script even has a joke about the baby blue peepers. In fact, it's got lots of jokes in it!  By the time he's got to the end of the script, I am so impressed I'm nearly weeping.  Who is this inventive little creature? And where is my Wii-obsessed son?

Now all he has to do is practise and by Monday he'll be Oscar material.

What did I contribute to this brilliantly inventive bit of work? Nowt.  Well,  I shelled out £1.50 for a pair of socks and the same again on some earrings.  Everything else was his own idea and his own words.

I think I can safely dump the helicopter parenting on the back burners for another year.
Delphic utterances by Alison Cross at 22:19